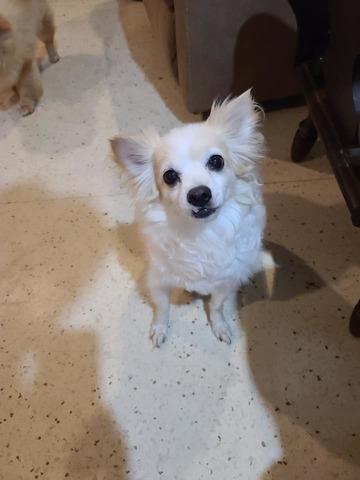 Willy is a very sweet 8 year old Pomeranian / Papillion mix. He is looking for his permanent home as he has been passed around way too much. He has had a dental and is neutered, up to date on vaccinations and microchipped. He has lost weight but will need to be kept on a strict diet as he was very over weight when he came to rescue. He loves women, will warm up to gentle men but is very cautious around children. Does very well with other small dogs. So his requirements are as follows:

REQUIREMENTS:
- Requires fenced yard
- No Children as he is not fond of them
- No cats as he chases them
- He does get along with other dogs with most other dogs....
- MUST BE HIS LAST AND FOREVER HOME!!!!! This dog has been tossed around like a bag of Doritos!!!

12/3 - I have had Willy with me for almost two weeks now and he has only had two episodes of violent reverse sneezing. I took him off of all the anitihistamines and just gave him remainder of his antibiotic which he is now finished with. I think he is now ready for his forever home. If you think you can give this boy his loving forever home please see requirements above.... Barb

11/16 - Took Willy back to vet as he is still having trouble and we stopped the prednisone as it was upsetting his stomach. He got a shot of prednisone to bypass stomach upset and a new antibiotic.

11/10 - I dropped Willy at the vet today. We are going to do an xray of his head to see if there is an abnormality in his sinus passages as he is still having trouble.  Willys X-ray showed no abnormalities. He is getting another round of prednisone and still getting his antihistamine. Hoping the weather change will help. He is resting comfortably too!!

10/30 - Willy was such a good boy at the vet. We have treated him for nose mites just in case although I don't think he has them, its a just in case. We also started him on Claritin Ready Tabs. So far he is doing well and hardly any snotting and sneezing. We pray this continues.... Will keep everyone updated on his progress.

10/28 - Willy was adopted and a week later he came back to rescue. He is having issues with his sinuses. We thought at first it was his gingal flaps but now we are not sure. We have taken him to the vets twice since his dental and he is going back at 5:30 today. We are trying to get to the bottom of this. He is back with his foster mom Brenda until we figure this out.... I stand behind my dogs.... Just so everyone realizes that I insisted Willy come back. We need to make sure he is ok before he goes anywhere!! Owners were heartbroken but they know he needs to get better.

9/21 - Willy had 5 teeth removed and two fistulas repaired. He also got a shot of Convenia, his DHPP and pain meds. He will be on soft food for two weeks till his flaps heal then he will be looking for his new home. He was a little whiney when I dropped him off and went to the door looking for me... why? Because I scratched his belly all the way to Brenda's house! Really its the anesthsia that makes them cry....

8/19 - Willy went to his vet appointment today and was such a good boy! He did bark at the other dogs but not surprising. He doesn't know them. Willy is 8 years old and housebroken. Willy's bloodwork was good, his knees were good, his heart was good and he is heartworm negative. He does have trachael issues but hoping that when we get some of his extra weight off that improves. He weighs in at 12.4 lbs and should probably be around 9 or 10 lbs. He is scheduled for a dental on 9/21 and will probably need some extractions. We are on the cancellation list so hoping it will be sooner than that. Willy will be available for adoption after his dental. He is looking for someone that is patient with him while he adjusts yet again. He likes women and will warm up to men if they are patient with him.

8/16 - Willy has been with me since yesterday. He is a very loving dog. Very cautious with men. He did take treats from my husband in a group dog treating session. He gets along with my dogs wonderfully. He did chase my cat that runs but with my cat Ppan who is not afraid of anything he was intimidated! LOL... My granddaughter came over yesterday. She is just over 2 years old. I told her to leave him alone and she did. He just sat by me and watched her running around like a crazy girl. This dog will need to be in a setting where he is given a chance to get to know his people and given lots of love. Patience is key with him. He needs vaccinations and a dental. Vet is backed up right now and he will not go anywhere till this is done. He also has a cough which we need to investigate but he is over weight so might have a little to do with it. He will be on a diet.... More to come...

8/15 - PCM Rescue welcomes Willy !!!!  Willy looks to be somewhere between 7-10 years old. Not even sure on that. He is an owner surrender that has fear of men and children. We will be evaluating him on this and a lot of other things. Seems to get along with my dogs so far. He will need to be fully vetted. He will not be going anywhere until all of this is done.